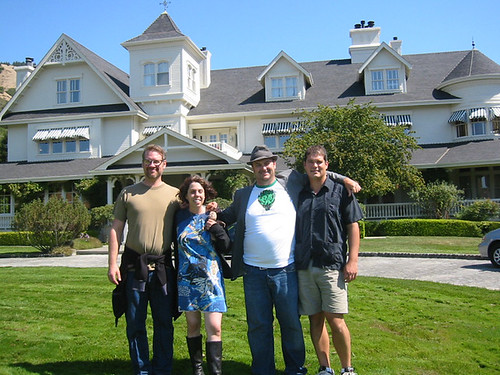 I gave the indie band The Decemberists a tour of Skywalker, and they were so thrilled that they turned their sold-out Fillmore show in San Francisco this Monday into an homage to Star Wars complete with the violinist Petra playing the Star Wars theme in between songs, Jenny chiming in with trivia bits about the saga (she was also wearing her one-of-a-kind Star Wars bedsheets dress as you can see in the photo above), a big shoutout to Lucasfilm and of course a nice lightsaber duel during on of their most popular songs. There even called it "Star Wars Night" to the crowd. Which made me feel all warm and fuzzy inside.

Of course, if you know anything about San Francisco indie audiences, they rarely bother to show any excitement at shows because it's "oh so not hip" but this show was different. The crowd went nuts and they loved it (except I'm sure for a few bitter kids) when members of The Decemberists showed their geek love for a galaxy far, far away.

Guitar Duel then the Lightsaber Duel (at the end)
----------
And of course it's blogged about everywhere, but here's a sample:
Digging the Decemberists

And in case you have NO IDEA what's the Decemberists connection with Star Wars,
here's my interview with them on starwars.com:
The Decemberists Take Chewie on Tour
Collapse