"You're gonna shoot your eye out!"

A Christmas Story in 30 Seconds
(reenacted by Bunnies) 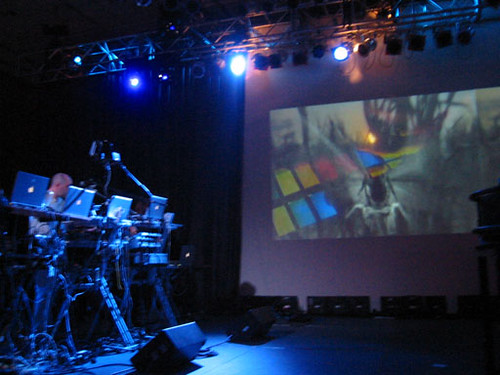 This weekend I attended G.A.M.E. -- Games and Music Experience convention at the Moscone Center, here in San Francisco. I went initially to hang out with my coworkers who were there to show off LucasArts games like Galaxies and Empire At War... but what I stayed for was a rare opportunity to see one of my favorite bands of all time play on the music stage.

Industrial/Techno legends Meat Beat Manifesto showed up in full force playing oldies like "Helter Skelter" and "Mindstream", as well as some new tunes. As usually, they spliced audio and video footage on their army of Macs at the live show and got the diverse crowd of gamers and older raver/goth kids jumping up and down. They added in recent footage of everything from Bush speeches (spliced with scenes from Deliverance) to Janet Jackson's nipple exposure. They truly are geniuses at mixed media performances, and in some sense the Godfathers of Video and Audio Mash-Ups.

Check out my Flickr photo set of the show here:
Meat Beat Manifesto at G.A.M.E.

If you've read my previous blog on the Vader Says "Noooooo!" Mash-ups, then you might find this series of Indiana Jones Mash-Ups just as amusing. Or you may just scratch your head and wonder why so many fans waste time making these little bizarre tributes.

Either way, get ready to chuckle.

Which one do you like best?
(be sure to turn on your speakers for the full effect!)