Sculptor/illustrator Lawrence Noble gives step-by-step tips on how to make your very own festive Yoda creation from a pumpkin, a gourd and some oranges just in time for Halloween!

Get all the instructions here:
Sculpt a Halloween Yoda Pumpkin (Starwars.com) 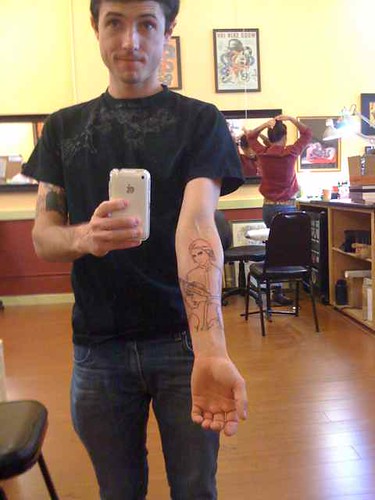 Getting "The Princess" Tattoo

When artist Craig Drake gave Princess Leia the '80s -- ala Duran Duran Rio -- treatment with his portrait "The Princess" it was only a matter of time before a fan decided to commemorate the art in a more permanent manner. Little did we fathom that our own Matt Martin from Lucas Online would be first up under the needle to get "The Princess" tattoo.

Above is the first look at the tattoo from the Sacred Rose Tattoo studio in Berkeley, Calif. Stay tuned to see how the final tattoo turns out, as well as an interview on Starwars.com with tattoo artist Karen Roze. 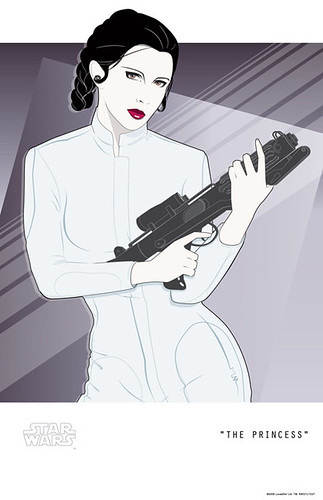 ("The Princess" art by Craig Drake) 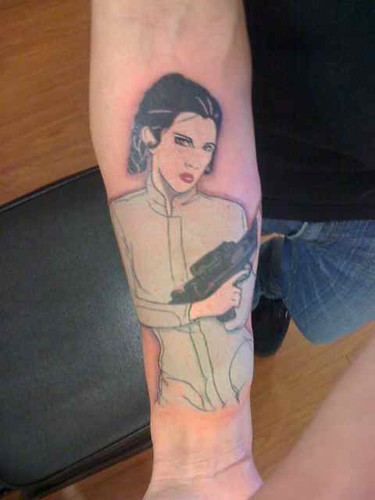 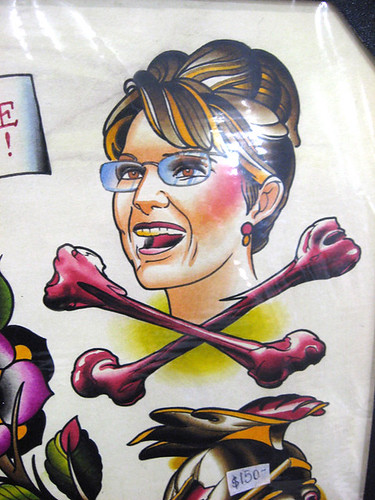 The Story Behind the Palin Poison Tattoo
Words: Bonnie Burton

Everyone who gets a tattoo has one heck of a back story about it. So while attending the San Jose Tattoo Convention this weekend, I couldn't help but think this design of VP candidate Sarah Palin as a Skull and Crossbones Poison tattoo was anything short of genius. The Palin Poison tattoo is done by tattoo artist Edu Cerro from O'Reilly's Tattoo Parlour in Santa Cruz, who was inking people with that design for FREE at the convention. I chatted with artistic mad scientist Dr. Sprinkles about why he got the tattoo and the reaction he's been getting since he went under the needle.

Why did you decide to get a Palin and crossbones poison tattoo?

I walked by and saw the Palin tattoo on a flash sheet for O'Reilley's Tattoo out of Santa Cruz and thought it was hilarious. Then I noticed the "free" sticker. I walked off chuckling to myself about getting that tattoo. When my friends and I sat down we kept talking about it and I decided to just do it. I wanted to have "Poison" written underneath to complete the design. First off, this made it look like the standard poison tattoo. Second, I'm not necessarily a
fan of the McCain/Palin campaign so it became a political statement as well. On top of all that, in a few years when no one remembers who Palin is, it's just some sexy librarian lady on my leg. 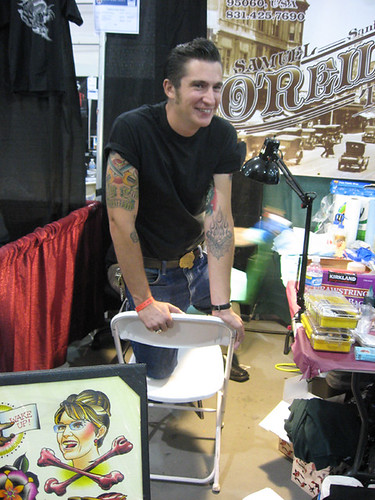 I'm a HUGE history buff so it's cool having some random piece of history tattooed on. Finally, as an artist I know what it's like when you really, really want to do a piece of art but can't find someone to commission it. This is especially hard if you are a tattoo artist and want to do a ridiculous tattoo on someone -- it can be hard to find a willing canvas basically. It's funny, it's an amazing piece of art and it was free!

Everyone who has seen the tattoo LOVES it! I had soooooo many people want to take pictures of it at the convention. In the last few days I've had a ton of people ask to see it as they hear about it. 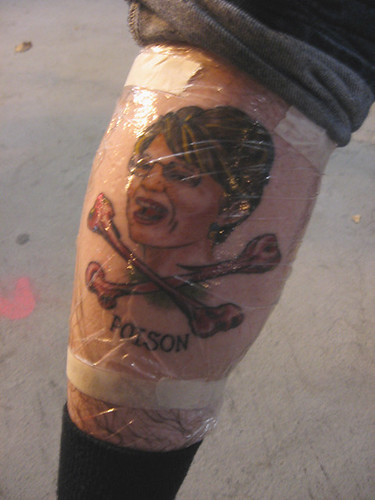 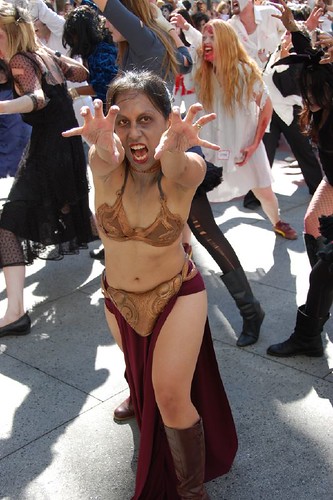 (Photo courtesy of Oakley Boren.)
Zombie Leia has come for your braaaaaaaaains!

Every time I hear Michael Jackson's song "Thriller" I'm compelled to dress like a zombie and dance in the streets. Looks like I'm not alone. In fact, thousands of people do just that one day every year to celebrate Thrill the World. In the various video clips of zombies dancing their phalanges off, I noticed a Star Wars fan in the group in the form of Zombie Princess Leia, in the Los Angeles Thrill the World crew. Oakley Boren showed her zombie moves while dressed like Slave Leia -- a very creepy Slave Leia. I chatted with her about the Thrill the World event and why she chose to show off her Star Wars cred amongst the zombies.

What's the background behind Thrill the World? Describe it for people who may not know what it's all about.
Thrill the World is a worldwide simultaneous dance of Michael Jackson's song "Thriller." A new world record has been set on October 25 at 11 a.m. PST (or October 26 in some parts of the world) for the most people danced to "Thriller" at the same time with 4,177 in 10 countries. This is the first time for Los Angeles to have a team and we managed to gather 114 participants at Hollywood & Highland Center including Thrill the World creator and director Ines Markeljevic from Toronto and actor/dancer Adam Sevani aka "Moose" from Step Up 2 the Streets as our Michael Jackson.