Sometimes a girl just has to follow her heart no matter where it may lead. After suffering through too many broken hearts thanks to dating boys who never quite appreciated my geek girl ways, I made a vow never to give my heart to anyone ever again who rolled their eyes when I attempted a Wookiee roar. I guess you could say I was looking for love in Alderaan places.

There's nothing wrong with humans. I just find them to be a bit boring. They rarely have a screwdriver handy when you need it. They never seem interested in listening about your day. They always get lost on trips. They refuse to go out dancing. They hate relaying complicated messages to your friends. They're so insecure with who they are; they never know what they want or how to express their true feelings.

R2-D2 puts all you human boys to shame. He's got a built-in GPS (so says Uncle George) so he never gets lost. Plus you should see Artoo's dance moves! And yes, he's got more gadgets and charm than James Bond himself.
I've always had a secret crush on Artoo ever since I first saw him in A New Hope. Granted, I was just a kid then. What did I know about astromech love? But I kept a special place in my heart for him, fully knowing I may never meet him face to dome. It wasn't until many years later when I landed a job as Lucasfilm that I took my chance and made the first move. 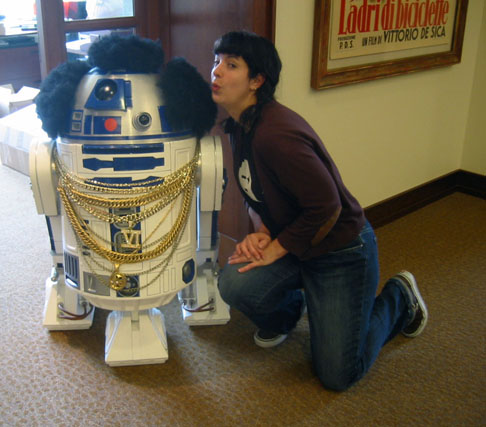 We first officially met and hung out when he was dressed as Mr. T to meet Conan O'Brien on his visit to ILM. Not a lot of people realize this (unless you speak droid), but Artoo has a wicked sense of humor. Of course, I'm a sucker for robot puns so we were smitten from the start.

Our busy schedules made it almost impossible to have that first date we kept promising each other. It also didn't help that C-3PO was always getting in the way of a love connection. So I waited patiently to make my move which came in the form of Star Wars Celebration V.

I signed us up for speed dating so we could at least have a few quick moments together. I learned that we have a lot in common. We both enjoy nachos and burgers. We both stopped smoking ages ago. We both hate getting sick. And we love to hang out at the skate park.

Thanks to speed dating I learned new things about my short, shiny and charming Artoo. He loves long strolls on the beach (it reminds him of Tatooine), oil baths by candle light, beeping along to Kraftwerk songs, drinking his favorite cocktail the Flameout and when C-3PO isn't looking he has an extension that gives him rabbit ears.


Before I knew it, speed dating was over and I asked him if he wanted to get cocktails at the G4 Hoth Ice Bar. He agreed and we happily rolled over to the bar. Two drinks in, Artoo popped the question if I'd make him the luckiest droid in the galaxy and be his wife! Of course, I'm not too fluent in astromech, so I hope he wasn't just asking for another drink.

Friday the 13, August 2010, was a good day for a droid wedding! He met me over at the Star Wars Celebration V Commitment Chapel where my flower droid R2-KT, my Maid of Honor Adrianne Curry and Artoo's Best Man Darth Vader were waiting. Luckily, C-3PO got his wires crossed and didn't make it in time to protest. (whew)

Lucasfilm Director of Fan Relations Steve Sansweet gave me away, and before I knew it Darth Maul was reading our vows:

"Do you, Bonnie Burton, promise to take unnatural pride in your relationship in times of full battery charges, as well as times of loose wires and astromech malfunctions?"

"Do you, R2-D2, promise to always think dark thoughts even as you cherish and respect her, love and embrace her in times of Death Star implosions and in times of Echo Base destructions?"

Artoo gave me a lovely ring, and I gave him a shiny, new restraining bolt to signify our love. Even though Elvis Trooper tried to stop the wedding by yelling "It's a trap!" our Best Man Darth Vader Force-choked him into submission. Thanks Ani!

As I gazed into Artoo's radar eye, I knew this romance would last. With a kiss we sealed the deal and rolled down the isle to thunderous applause and the exit song "Mr. Roboto" by Styx.

Even though Artoo's colorful past as a ladies' droid may have scared off some former girlfriends, I'm in for the long haul. I'm a modern kind of girl. We have an Open Source Marriage, meaning he can be with other droids, and I can still flirt with Sith Lords, bounty hunters, Jedi, and Time Lords.

I realize marrying a droid won't be accepted by everyone, especially the Galactic Senate and most of Arizona, but I know deep in my heart I made the right choice.

I found the droid I was looking for; then I married him.
Collapse